How to benchmark your C# code

For a little fun I recently completed the string calculator TDD Kata. In my implementation there are a few areas that make use of StartsWith, IndexOf and SubString methods. Code such as this will more often than not open up the debate of the aforementioned string methods vs. regular expressions. For my own entertainment I wrote two implementations of the string manipulation area of the Kata, one using SubString and the other using RegEx. This lead to a question - which is faster and in what context? I would typically create a throw away console app and make creative use of the StopWatch class then paste in the blocks of code to compare execution times but I decided this time I would create something a little more re-usable and share the results.

A simple app for performance tuning your C# code

I wanted a very simple method of comparing the two implementations so I could prove which would be the fastest. Since I was writing a lot of unit tests whilst performing the string calculator I wanted something that worked in a similar fashion to benchmark and compare my code. I had the idea of creating a small unit of code and being able to tag the method with an attribute. I would then need some way of being able to run a bunch of these small units of code and have some output reporting the execution time of each unit.

The below class illustrates the usage. Note the ProfileClass and ProfileMethod attributes. In this example I’m comparing a For loop with a ForEach loop.

The output from the above class looks as follows:

In the context of the string calculator the code I put together to compare the two string parser implementations looks as below. By the way, the substring implementation was faster, which is what I expected in this context of a short and simple string.

I created a class library using the naming convention .benchmarks in my solution that contains these classes. 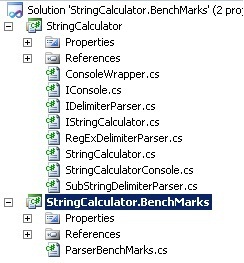 Just simply add a reference of the pUnit.dll to your .benchmarks project and add the attributes to your class and method(s) as per the previous examples. This is available as a Nuget package.

Ideally I would like to create a right-click menu item that works in a similar fashion to TestDriven.Net, however I will follow that up in a later revision of the code.

The main method that performs the benchmark was based on this question & answer from StackOverflow. The simplicity of this approach was a perfect match for what I was trying to achieve. If you would like more background about this method I recommend reading the answers to the question.

The default number of iterations in this application is 1000, however you can overload this number per method by passing the value via the attribute constructor.

I have called this little framework pUnit - where the p stands for performance!