This tutorial series breaks down how to refactor a single page web application that has lots of in-line JavaScript. I put together a simple page that contains some technical debt, so that I could highlight some of the less than ideal parts and of course, how to improve them!

I wrote this code under the following conditions:

What the app does?

I based this app on the SF Movies example from the Uber Coding Challenge page. (I also wrote the server-side code for this, which I will save for another tutorial).

The spec is to:

Create a service that shows on a map where movies have been filmed in San Francisco. The user should be able to filter the view using autocompletion search.

Here’s a screen shot of the app: 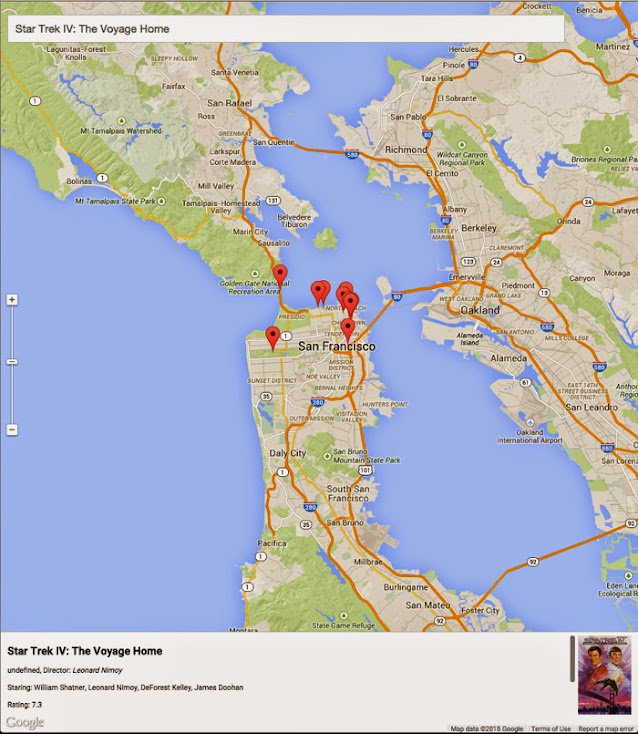 There is a small video demonstrating the functionality: SF Movies App Video

Here is a gist of the less than ideal code. It’s all contained in a single HTML file.

I’ve definitely written code like this earlier in my career. In fact, I would say that there’s a lot of JavaScript out there like this, especially if it was written more than a few years before all things JavaScript started to mature. If the JavaScript you are working with now resembles this example a little, then the points covered in this article will help to make the code more manageable!

Important Note: This is the first part in a series, and in this part there is more emphasis on re-structuring the application rather than analysing each line of code.

Let’s breakdown the problems with the code.

Looking at the gist, the first thing we have to scroll through is CSS. So for a quick win this can be moved into a separate file. Something that’s also not ideal is style information in the JavaScript. Here’s an example of this:

If we extract this into the CSS file also, we can drop several lines of JavaScript:

This is a small change, but imagine how this problem could be amplified over a large code base? Hundreds (thousands?) of lines of JavaScript could be avoided!

For good measure, we should also use className over id to apply the CSS style to avoid CSS specificity issues.

See the git commit to track the changes made.

Usage of the Google Maps object (google.maps) is sprinkled throughout the code. What if the map provider needs to be changed? I would have to search through and find all instances of google.maps in order to replace them. There is also code that toggles certain elements of the map through the app to show/hide elements, plot/remove location markers etc. If the map logic was moved to its own abstraction, it could also maintain its own state.

The Google Maps API has a lot of functionality, but this app uses only a fraction to:

Only the functionality to support this is exposed via this new abstraction which can be used as:

It’s a subtle change, but it means larger blocks of code within the main app to configure the map state, such as:

Can now become a single line, since such code can be moved to the abstraction:

See the git commit to track the changes made.

Issue #3 Doing too many things

I believe in the mantra of software libraries that should do just one thing, and do it well. Something that violates this principle in this app is the functionality for the AJAX autocomplete. Logic for the autocomplete is mixed in with the logic for the app, resulting in a bunch of mixed up functions that are hard to decipher.

The main code for the autoCompleteEvent function can be found here.

See the git commit. With this change, we’ve been able to remove a lot of code from the app. All the autocomplete related logic we saw before can now be replaced with:

I introduced Bower for front-end package management. This enables the download of the autocomplete library from Github rather than have it as part of the code base.

Side Note: I know that I said that a condition in building this app was no 3rd party libraries or frameworks. But that condition was in place to emphasise the importance of using small, single purpose libraries to grow a code-base.

To recap, the index page is looking a little leaner so far as we can see from the gist. In order to understand the main functionality and purpose of the app, we’ve gone from having to read 434 lines of code to read, to just 222. There’s still room for improvement.

The next problem is chunks of code that dynamically create HTML and register it to the DOM. Here’s an example:

Since the HTML is associated with the presentation, we don’t really want this mixed in with the logic of the app. If we centralised the HTML, it would be much easier for us to make HTML changes in the future.

This is a little easier on the eyes:

What does templates.home() do? Here’s the code:

Note: another approach is to make use of template libraries such as handlebarsjs. Since they ultimately take HTML fragments, parse the contents and make them into strings anyway, I’ve used strings in JavaScript to keep things simple. Templating “may” be introduced in a later tutorial ;-)

A problem we have with the current code is that it’s not easy to determine which section does what based on the app’s features.

To recap, the main features are:

This is a simple change to group the related functions under comment headings which will help us for the next step.

See the git commit to see how the code has been logically grouped.

Issue #5.1 Everything in a single file

The next step is to move these logical feature groups into their own files.

The entry point to the app is now a lot easier to understand:

Moving the code into separate files makes it easier to use code analysis tools. A popular choice for JavaScript developers is JSHint.

Running JSHint against these files yields 64 errors (which I have to admit, is less than what I was expecting). The errors range from lines that are too long, not using ‘strict’ code and missing/using unnecessary semi-colons.

Working through the issues leaves 27 jshint errors that are less trivial to fix and also reveal a problem with the architecture of the app.

The errors are all along the lines of:

What does ‘is not defined’ mean? Consider the following code:

As this file is now self-contained, jshint analyses this without taking into consideration the rest of the files. This is why it reports that HomeControl is never used, even though we know that it indeed is from elsewhere in the app.

Despite these warnings, the code runs without error. This subtle error is due to global variables in JavaScript. JShint is right, the object called templates isn’t defined in this file, but when I run this code in the browser, the browser will look for templates on the global scope (the window object) where it will indeed find it, since our file templates.js creates an object called templates and places it on the global window object.

The use of document.createElement should also generate a warning, since we haven’t defined that either but it doesn’t since document is provided by the browser. JShint is configured to know about document and that this is a global object that will always be available as convention.

How to fix this? Well, it depends what you mean by “fix”! We can make the jshint errors go away by being explicit as to which variables are on the global/window object.

Here’s the updated HomeControl function with these changes. As with the document object, JSHint knows that the window object will be defined by the browser, so it doesn’t produce an error. In this updated code, we are being specific that we are adding objects to the global window object:

Important Note: Placing things on the global window object like this is not ideal, even though it corrects the JShint errors. But, we’re moving in the right direction. Improving upon this will be covered in a later tutorial.

By fixing the problems raised so far, we’ve introduced a new one. Breaking the features out into separate files comes with some extra download bloat for the app. The number of JavaScript includes now looks as follows:

Using a minification tools along with a task runner such as Grunt, will condense these files into a single file. The result being that we can reference the JavaScript source as a single file:

There is still room for improvement, but the app is in better shape than before. Now, if a developer new to this project had to go and change the HTML for the home panel, or change what movie data is displayed once a movie is selected, they would have a much better chance of identifying where in the code-base they should be looking.

The next set of improvements will be discussed in the next tutorial (coming soon).

The Github project and branch can be found at: https://github.com/bbraithwaite/sf-movies-web/tree/refactoring

Bradley Braithwaite is a software engineer who works for search engine start-ups. He is a published author at pluralsight.com. He writes about software development practices, JavaScript, AngularJS and Node.js via his website bradoncode.com. Find out more about Brad. Find him via:
Twitter